Given the government’s target to increase overall investment in research and development (R&D) in the UK to 2.4 percent of the GDP, we have investigated three big questions: 1

According to our analysis, overall funding for Life Sciences and health R&D in the UK is insufficient to cover all the need. When comparing R&D funding to burden of disease for different conditions, we found that there are gaps in investment in a number of disease areas.

Some of the major areas are cardiovascular disease and stroke which are under-funded by £512 million, respiratory disease by £324 million, and neurological and mental health disorders by £181 million.

Overall, in order to bridge these gaps in funding and fill the unmet need, an additional £1.34 billion will need to be invested in Life Science research in the UK across the various under-funded disease areas.

To undertake this research, we followed five steps:

The data sources used for this analysis originate from the Office for National Statistics and from the different funding entities of Life Sciences and health R&D. These entities mainly consist of pharmaceutical companies – who provide the largest share of funding – as well as the Medical Research Council and prominent charities like Cancer Research UK and the British Heart Foundation.

Burden of disease measured in YLL and DALYs

Understanding the burden and toll of different diseases is an essential first step to assessing the sufficiency of funding. In order to do so, we used two different metrics: years of life lost (YLL) and disability-adjusted life years (DALYs).

Years of life lost are a measure of total number of deaths from a certain condition (i.e. mortality), but also taking into account the age at death for a set life expectancy (in this case 80 years). YLL are meant to quantify the years of life lost from premature death due to a disease.

Some diseases, however, may not have a high fatality rate but still cause significant disability and thus substantially hinder a person’s life. DALYs, or disability-adjusted life years, provide a more comprehensive metric, taking into account not only the years of life lost (YLL) due to a disease, but also the years lost due to disability (YLD) caused by that condition. As such, one DALY can be conceived of as one lost year of ‘healthy’ life.2

The number of YLL and DALYs associated with different disease areas is depicted in Figure 1. This chart allows to see which diseases are killing people in the UK and causing them disability. Cancer is clearly responsible for the highest burden of disease, whether it is expressed in YLL or DALYs, followed by cardiovascular disease and stroke, and neurological and mental health conditions. 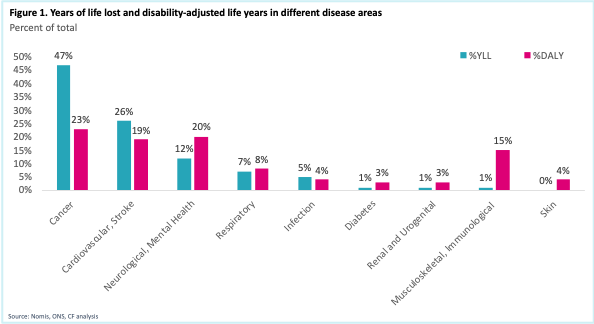 Our second big question was around the different funding bodies of R&D in Life Sciences and health. We studied the amount of investment by different sources (see Figure 2b), and found that pharmaceutical companies provide by far the highest share of R&D funding, followed by the Medical Research Council and some other prominent charities such as Cancer Research UK and the UK government.

Looking at different disease areas (see Figure 2a), cancer clearly receives the most funding, largely from pharmaceutical companies, with a considerable amount also provided by charities including Cancer Research UK. The Medical Research Council meanwhile prioritised research on neurological diseases and mental health as well as infection. Other conditions get some funding from pharmaceutical companies as well as some dedicated charities. 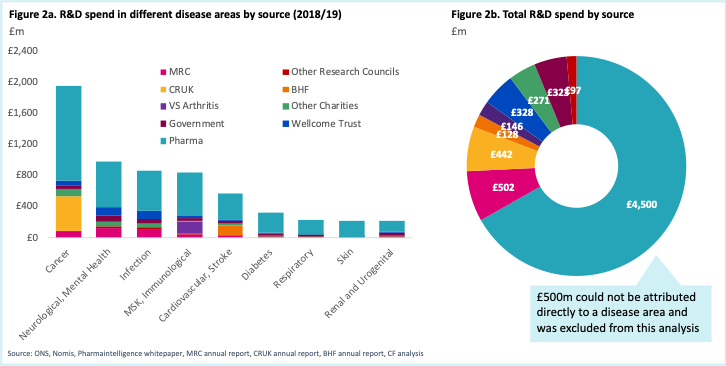 How does R&D spend compare to burden of disease?

To assess the amount of R&D investment compared to the burden of disease of each condition, we plotted research spend against DALYs by disease area. We opted for DALYs as a measure of burden of disease because it accounts for years lost due to disability as well as years of life lost.

This illustration once again allows us to visualise which diseases are responsible for the highest number of DALYs, with cancer, neurological and mental health, and cardiovascular and stroke at the top of the list (see Figure 3). However, these disease areas fair very differently in terms of investment, with cancer located way above the trendline while CVD/stroke and neurological/mental health are under it. These inequalities in research funding are also apparent for conditions that have a lower DALY count. In fact, respiratory disease, skin, renal and urogenital, as well as musculoskeletal and immunological diseases are all receiving less funding than what their associated DALYs would predict.

Indeed, when considering the amount invested per DALY, we find massive inequalities ranging from £1.4k for infection, around £600 for cancer, to a mere £215 per DALY for cardiovascular diseases and stroke as well as for respiratory diseases.

Quantifying this deficit reveals that a total additional investment of £1.34 billion is needed to bridge the funding gaps for these disease areas (see Table 1). The major underweight areas include cardiovascular and stroke with a £512 million deficit, respiratory which is underfunded by £324 million and neurological and mental health which needs £181 million more to fill the unmet need. 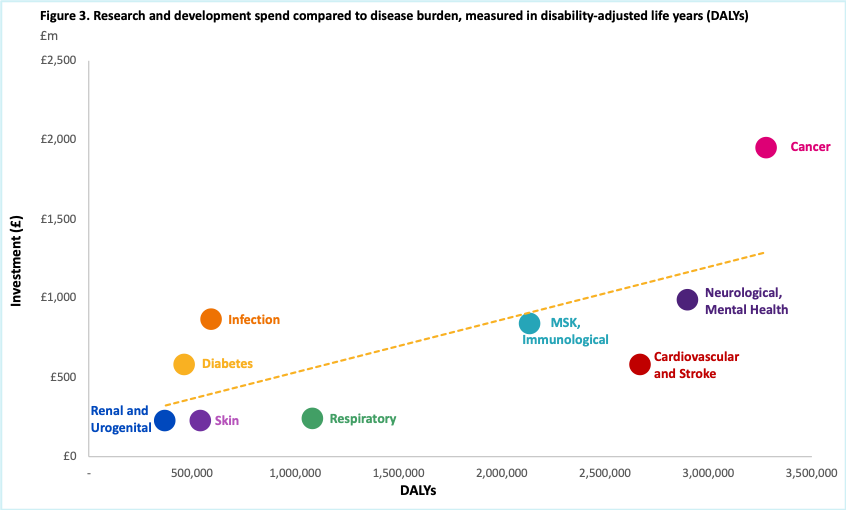 Indeed, when considering the amount invested per DALY, we find massive inequalities ranging from £1.4k for infection, around £600 for cancer, to a mere £215 per DALY for cardiovascular diseases and stroke as well as for respiratory diseases.

Quantifying this deficit reveals that a total additional investment of £1.34 billion is needed to bridge the funding gaps for these disease areas (see Table 1). The major underweight areas include cardiovascular and stroke with a £512 million deficit, respiratory which is underfunded by £324 million and neurological and mental health which needs £181 million more to fill the unmet need. 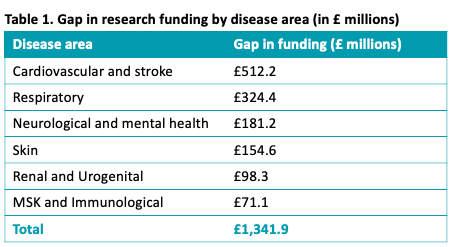 Cancer, cardiovascular disease/stroke, and neurological/mental health conditions are the leading causes for mortality and disability in the UK. Pharmaceutical companies contribute the largest share of funding for research advancement in all diseases areas in the UK, with a significant focus on cancer. Cancer also receives funding from prominent charities such as CRUK, and rightfully so as it is associated with the highest burden of disease.

Cardiovascular disease and stroke, however, are largely underfunded considering their underlying burden of disease. While CVD and stroke have historically received significant funding from pharma, this is no longer the case. This might stem from a belief that the science is not yet ready for further advancement in these areas, which means that the burden has fallen on the government and charities to fill the gap in investment.

Neurological and mental health conditions receive funding from pharma, the Medical Research Council, and others, but this funding remains insufficient. Dementia and Alzheimer’s are predicted to become leading causes of death in the near future, hence increasing funding in these disease areas is essential.

Respiratory disease also receives little funding compared to its toll. The latter has been exacerbated in light of the COVID-19 pandemic, as people with an existing respiratory condition have been found to be at higher risk of dying from the virus. Additionally, the long-lasting effects of COVID-19 are still largely unknown, including the possibility of chronic respiratory conditions. For these reasons, additional investment in respiratory disease is crucial in order to prepare for future need.

Overall, our findings underline several areas of unmet need, suggesting that funding for Life Sciences and health R&D is not sufficient in the UK. There is an under-investment in many disease areas, most significantly in cardiovascular disease and stroke, neurological and mental health conditions, and respiratory disease. Bridging these funding gaps will require an additional investment of £1.34 billion in Life Sciences and health research and development.

Ben Richardson is a co-founder and Managing Partner at CF where he leads CF’s work in Life Sciences and Data Science & Analytics. Prior to joining CF Ben was a Partner at McKinsey & Company. He has worked across all aspects of health and care systems and for life sciences companies in the UK and around the world.

Scott Bentley is a Senior Manager at CF in Life Sciences. He has worked extensively with the health and care systems of the UK and Life Sciences companies. Prior to joining CF Scott worked at ZS Associates.

We would like to thank and acknowledge the support of Nour Mohanna in the drafting of this article.