We are delighted to announce that our Pandemic Scenario Planning Software for London has been shortlisted for Partnership of the Year at the HSJ Awards 2021 after winning “Best Healthcare Analytics Project for the NHS” at the HSJ Partnership Awards 2021 , recognising the outstanding contribution to healthcare – in what has been an exceptional and challenging period.

Following the intense and in-depth judging process, CF was shortlisted, ahead of the official awards ceremony to be held later this year (November 18th). Standing out amongst tough competition from hundreds of other exemplary applicants, CF’s partnership work with NHS London was selected based on ambition, visionary spirit and the demonstrable positive impact the project had on both patient and staff experiences.

NHSEI London region engaged CF at the start of the pandemic to support system-wide modelling of demand and capacity from infection through to community discharge. The team developed a browser-based application with a flexible predictive modelling interface capable of incorporating advances in clinical understanding across the patient pathway. The 5 STPs, 32 LA and 9 community trusts were able to plan using the same tool to predict admissions, occupancy, deaths, discharges, and impacts on social and community care over the following 18 months. This facilitated mutual aid across the region and critically enabled the best use of finite resources.

This follows the success at the HSJ Partnership Awards in Summer 2021 where CF won “Best Healthcare Analytics Project for the NHS”. The judges described the work as:

“A great example of an advanced analytical project with complex data flows being produced at pace with the end-user at the centre. There was a clear innovation regarding the inputs in both data flows and the range of scenario models and forecasts being provided for the user’s selection. A particular aspect to be applauded is that the project tackled the interaction between acute, social and community care.” 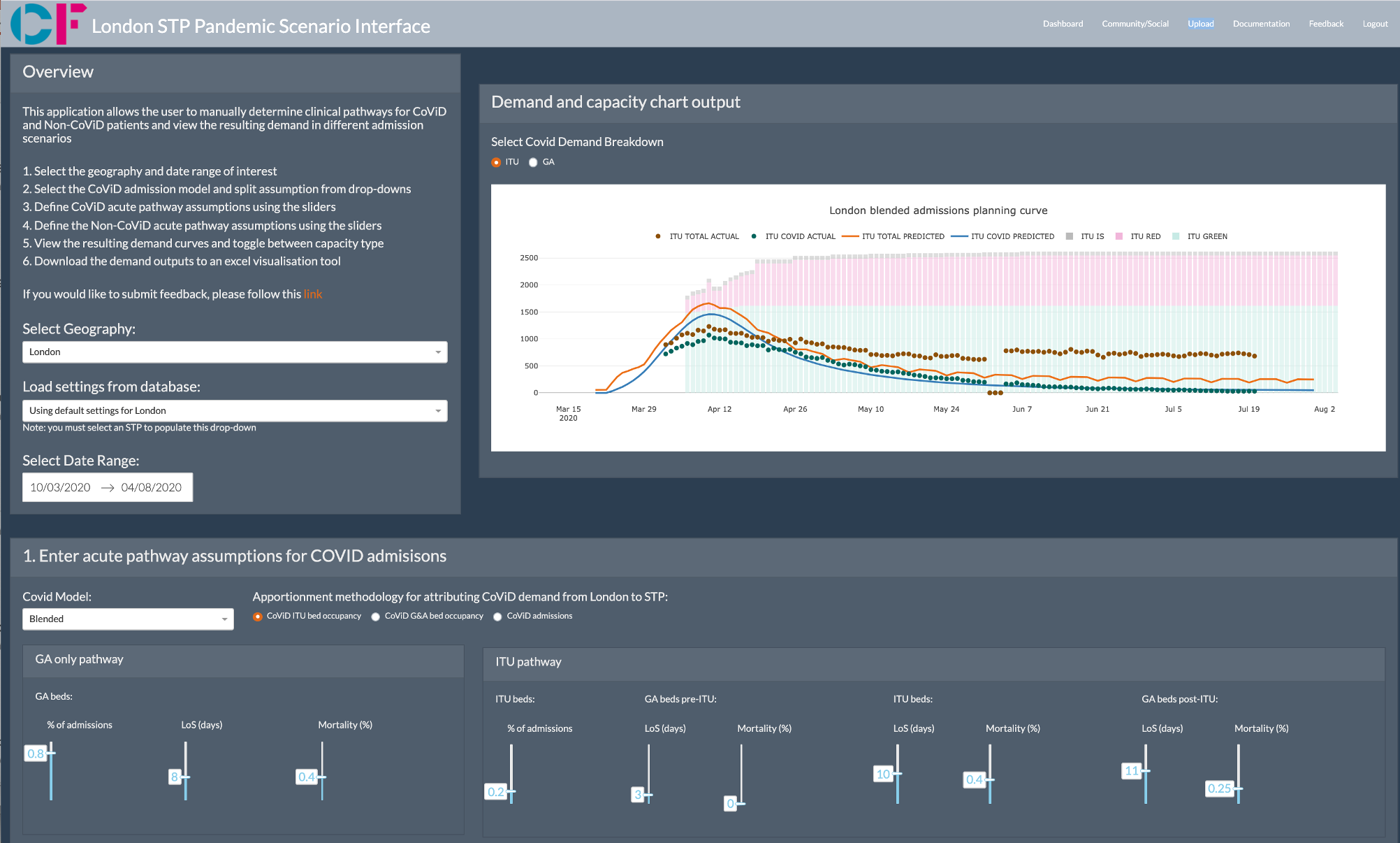 Testimonials from NHS partners working on the project

It is the first time we have understood our community and social care services in this way, with whole system modelling and the impact of that can’t be over-estimated for our colleagues planning services.

The technical skills at CF ensured we delivered everything we needed to, but most importantly their commitment has been unwavering and demonstrated in the hours they’ve put in working through issues with our team.

It’s been one of the most intense periods ever in the NHS, and the CF team has really risen to the challenge going above and beyond in supporting London throughout. I think the whole system modelling approach we have developed is genuinely new and exciting, and a game-changer in how we work across organisations and systems.

About the HSJ Awards

The most coveted accolade in UK healthcare, the HSJ Awards is the largest annual benchmarking and recognition programme for the health sector. Over the last 40 years the awards have been celebrating healthcare excellence through huge political, technological and financial challenges within the sector. Through a rigorous, fair and transparent judging process the awards produce a roll call of the best organisations, teams and people in the NHS and the wider health sector.

Despite the demanding circumstances of the past 18 months, over 1000 entries were received for this year’s HSJ Awards, with 205 organisations, projects and individuals making it to the final shortlist. The volume and standards of applications has been a true testament to those health and social care staff, who continue to push outstanding work and transformational projects across the sector.

HSJ editor Alistair McLellan, comments “On behalf of all my colleagues, I’d like to take this opportunity to congratulate CF on being nominated in the category of Partnership of the Year, in this year’s HSJ Awards. The applications we receive always present our panel of judges with a very difficult task as the standard is unfailingly high and the breadth of innovation and passion for patient care is always so inspiring.

The full list of nominees for the HSJ Awards 2021 can be found here.

The selected winners will be announced during the awards ceremony at Evolution, London on November 18th 2021