Following on from “A Lost Decade”, we publish the data behind the UK think-tank IPPR’s new report “The First Health is Wealth” which examines the economic and human impact of improving morbidity and mortality rates of the largest conditions.  IPPR referenced analysis conducted by CF in 2019, to demonstrate how by focusing on raising the standards and equality of care within the UK, it is possible to derive significant reduction in costs, increased economic contribution and above all reduce the number of premature deaths.

Within just one decade, deaths from dementia and Alzheimer’s has increased significantly

The First Health is Wealth paper uses CF analysis across four case studies; stroke, cardiovascular disease, cancer and dementia, which are currently the four largest drivers of mortality in England.

Despite heart disease, stroke and lung cancer decreasing, the UK has a higher incidence of mortality and morbidity in comparison to other Anglo-Saxon and Western European countries.  With the ONS population statistics showing an ageing population, it is imperative that long-term conditions remain a priority for health care commissioners. 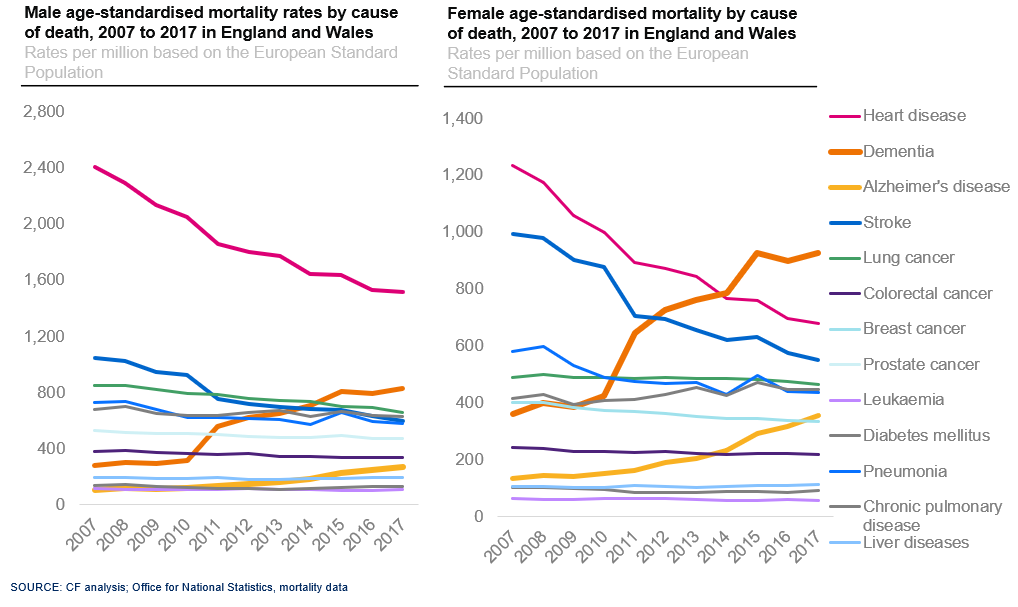 Our analysis aims to prove that health innovation does not only generate better health outcomes, but it can derive favourable economic gain by enabling people to continue contributing to the economy where illness may otherwise have impeded them.  The First Wealth is Health report uses CF analysis to illustrate the benefits of further investment into the NHS.  Our analysis has determined that the UK economy could be boosted by £28.2 billion through greater economic participation and avoided costs due to innovation in healthcare (£18.6 billion) and improvement in life sciences research and manufacturing (£9.6 billion).  Our article; “A Lost Decade – the data behind the report” outlines how it is possible to achieve a £5.3 billion boost to the UK economy through manufacturing advances and a further £4.3 billion boost via innovation through life sciences R&D.

Delivering £18.6 billion to the UK economy through improved health outcomes

Within this article, we will focus on how it is possible to attain an additional £18.6 billion in savings for the UK economy, through improving economic contribution (£10.3 billion) and avoided costs due to reducing mortality and morbidity (£8.3 billion).  Our analysis has shown that improving both mortality and morbidity across CVD, Cancer and Dementia would avoid nearly 20k deaths in the working-age population, a reduction in morbidity across 300k people is possible.

Determining the rate of improvement

We utilised the mortality rates by condition, across 25 countries spanning Western Europe and Anglo-Saxon countries; namely the USA, Australia and New Zealand.  CF calculated the difference between mortality rates between the best performer and the UK, giving our estimated the percentage reduction possible.  Each disease group was addressed separately as variances between treatment, mortality and social factors vary greatly between different disease groups. 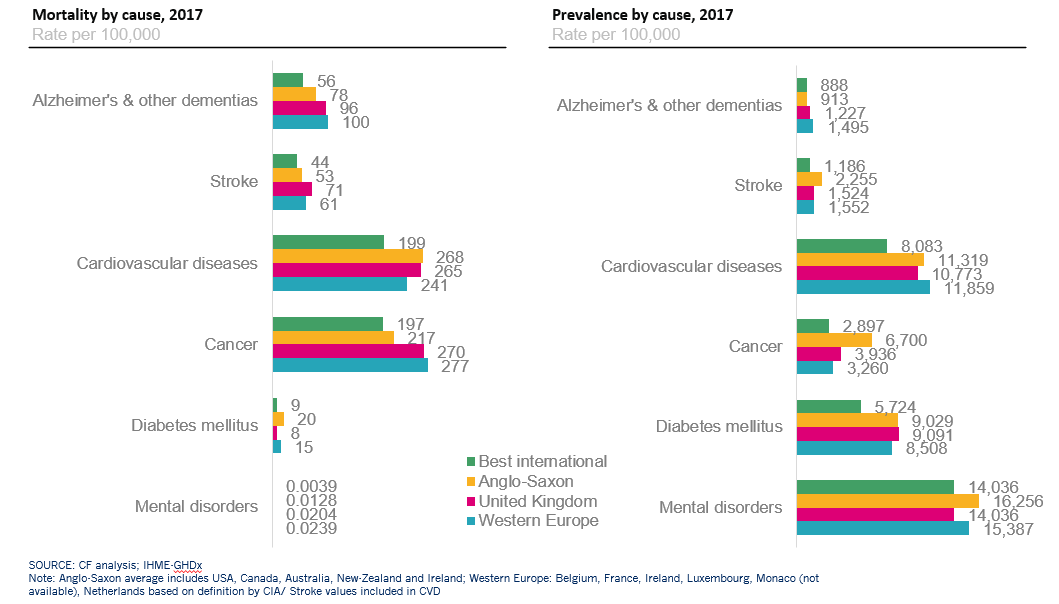 Delivering £10.3 billion through reduced costs to the NHS

Using datasets from Oxford University, NCBI and Alzheimers society on the costs associated with Cancer, CVD and Dementia respectively, we obtained the latest spending in the UK across healthcare, social care (publicly and privately funded) and wider incurred cost from care provided by family, the community or unpaid carers of individuals of working age (18-67) within the UK.  It is estimated that across all conditions, the UK economy faces £57,61billion in total care costs, with the total cost of care per individual vary from £3k up to £30k per annum.  Through improvements due to innovation and treatment, it is estimated that the UK could see a £10,3 billion benefit per annum. 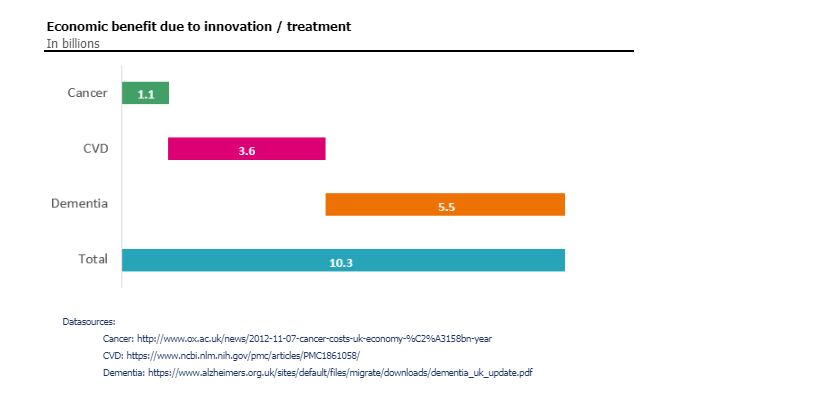 Improvements in health have wide-reaching implications, in our analysis, we not only looked at the potential deaths that could be avoided each year, but also the morbidity of the population.  It is supposed that an increased number of individuals would be able to return to the workforce or even indeed avoid being out of the workforce due to illness, the benefits of keeping the general workforce healthy and employed is paramount to driving strong economic benefits.

Using publicly available data across all three groups, we obtained the recent number of deaths per annum of those aged between 0-67 years in the UK per condition.  By applying the expected reduction in mortality rate by meeting the best performing peer from the peer dataset, it enabled CF to establish the potential number of deaths that could be avoided.

We were able to determine the proportion of avoided deaths possible; which has been estimated at 19.7k per annum.  By identifying the percentage of those who would be employed, we were able to then determine the economic benefit by utilising the GVA per person based on the variance of IMD1 and IMD4.

It is not possible to realise a total economic benefit of £770 million; therefore, we applied the same principle as before and took 50% of the total to attain the true Economic Benefit from avoided deaths which amount to £385 million.

The number of working-aged individuals with the condition was then multiplied by the potential reduction in prevalence if the UK matched its best performing peer.  Before applying the GVA for this dataset (0-67yrs), CF applied the current rate of the population who are unable to work due to sickness (20.46%).

Again, as before, it is not possible to realise the full total economic benefit of £15.8 billion; therefore, we applied the same principle as before and took 50% of the total to attain the true Economic Benefit from avoided long term sickness which amounts to £7.9 billion.  Leading to our combined economic boost to the economy through mortality and morbidity improvements by £ 8.28 billion. 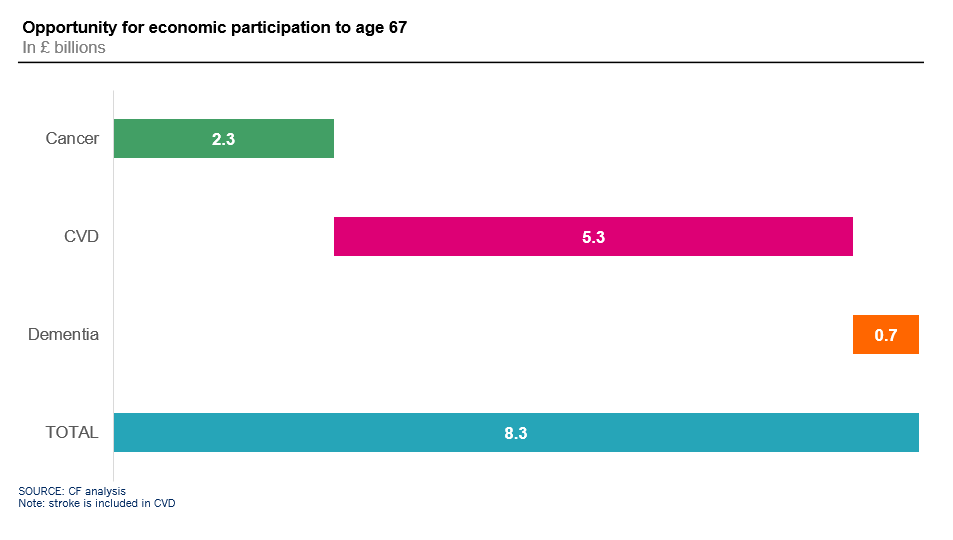 Innovation benefits lives and the economy

It is clear that by modelling the mortality and morbidity of the population, that the true economic benefits can be uncovered. The model has shown that 1.72m lives could be saved, placing 350k more individuals back into the workplace.

Everything, however, comes with a cost and the NHS has limited capital to utilise and a multitude of demands on how to spend the money. There is the potential to deliver £18.3bn back to the UK economy, it is just a case of moving forward.

You can download the full report including data tables, charts and sources.